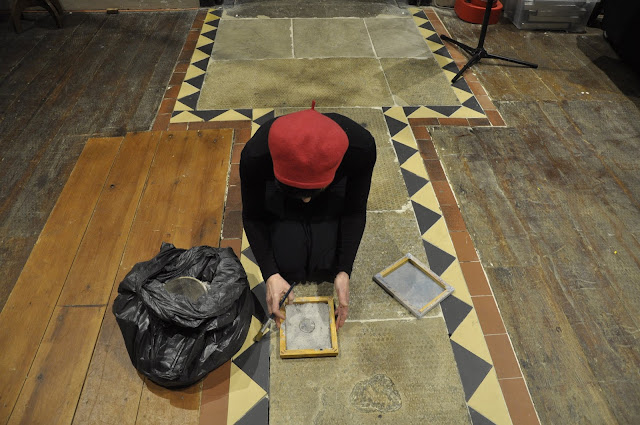 Ashes to Ashes is a performance which was developed following a visit to The Jungle, refugee camp in Calais, during which the camp was devastated by a storm and fire, in 2015.
The performance investigates the process of destruction/creation which is inherent to nature and to our life as human on earth. The work sends our gaze beyond the camp, and brings to the surface the global issues of migration and climate change, two forces which are intricately linked.
The work is developed as a continuous process where Laurence reproduces the rectangular shape of the 40 shelters which were destroyed on the night of her visit.
The work sits amongst the visitors who may or may not notice its presence, while walking through the space and erasing the shapes in their footsteps.
In the middle of each rectangle, a hole shaped with a small tin recovered from the wreckage, that night, acts as a key to  feeling and understanding loss and grief. The repeating of the action may offer a key to our resilience and survival.

The ‘Letter to Fantnu’, a lost message written on her return home, is offered to visitors in the performance space.

The performance was first acted in July 2016, during ‘Playground’, at Hansard Gallery.

‘In the current context of Brexit, I wish to revisit this performance to understand it again. The work explores the impact an artwork may have as an emotional and empathic tool to raise global awareness and trigger a move towards action.’ 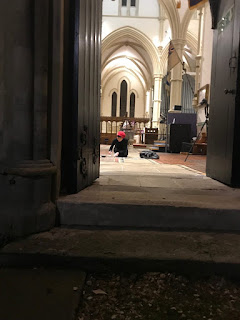 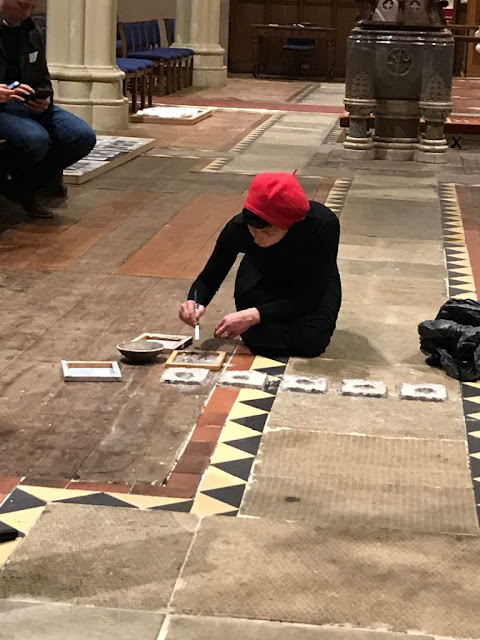 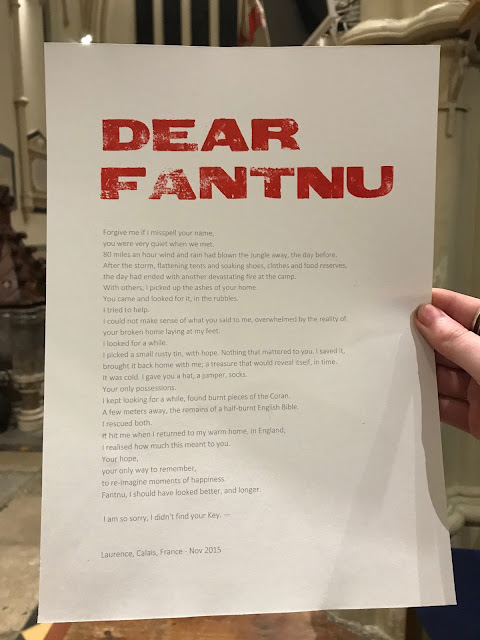 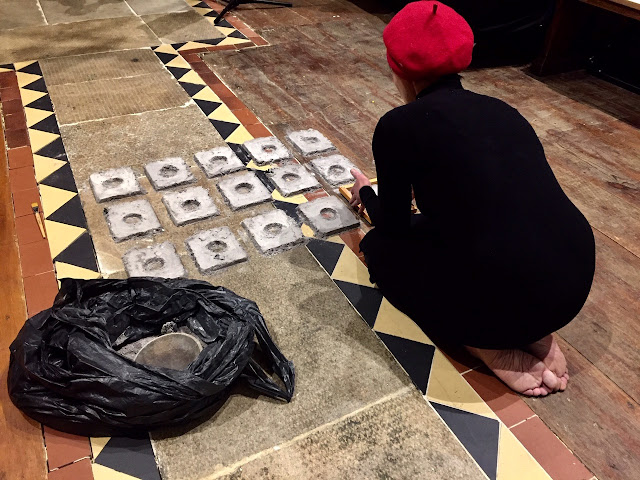 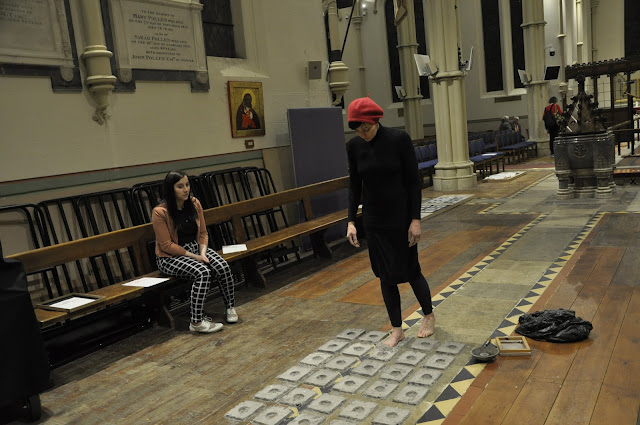 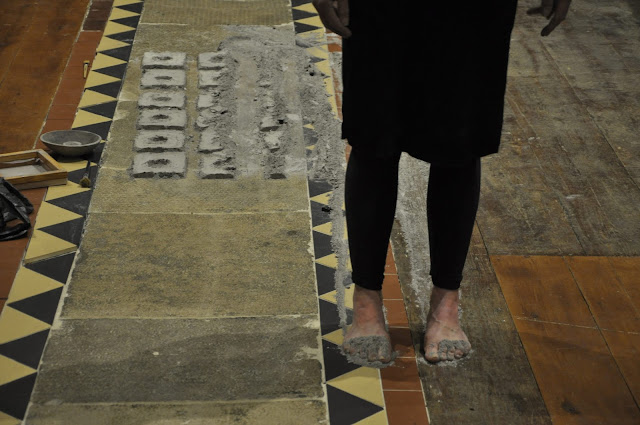 'I was very moved by the art installation @Laurencerushby in @stmarysandover last night. A solemn tribute to displaced people, in a beautiful setting. Congratulations @CASartists on celebrating 10 years...always chuffed to work with you! #localart #andover #community #culture'

Holes, Cracks, Gaps and Loopholes; a Micro-Residency at The Observatory(SPUD) , Mottisfont Abbey

supported by TVAF How the ‘French Artist’ fits in the local cultural and social landscape at Mottisfont. By Laurence Dube- Rushby Dates : 25 th /26 th I spent two days within the Observatory space at Mottisfont Abbey, investigating Loopholes, gaps and cracks within the architecture of the Abbey, the landscape and the building of the Observatory.  I set out to highlight  cracks and holes with natural elements such as coloured wool, pigments, fabrics or clay (as temporary non damaging installations). I  also used my own body (as “the French Artist Character”) and invited the public to use theirs to create shapes as individuals or groups to investigate these gaps and the ‘space between things’. I proposed to use the architecture and garden as a metaphor for the wider social context, exploring how artists use ‘ cracks holes and loopholes’ , to find their way into systems which they navigate, investigate and transform through their unique artistic vision. 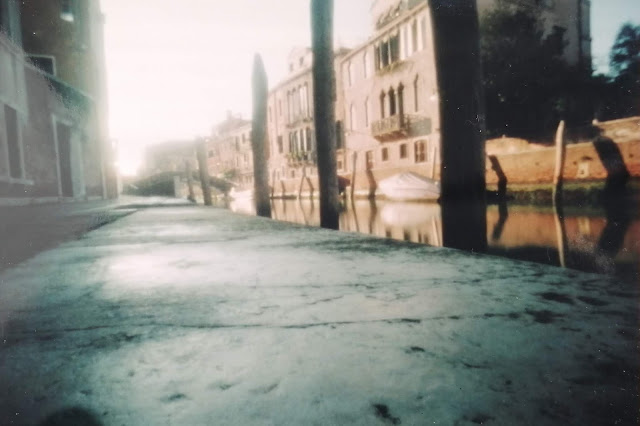 Follow my new blog;  http://venicemakingsense.blogspot.com   Pinhole-Venice 2015 Who am I? I am an artist, art consultant, project manager and PhD candidate in creative pedagogies at Arts University Bournemouth. In January 2019, I received a  Venice Biennale British Council Research Fellowship  through  A-Space Art,  Southampton. I will be heading to Venice on the 31st of July, until the 30th of August,(returning just in time to celebrate our wedding anniversary). https://venicebiennale.britishcouncil.org/fellowship/about http://aspacearts.org.uk/news/venice-art-biennale-a-space-fellowship-artists-announced Why go to Venice at the hottest time of the year? As a French native born on the ocean seaside, I am a definite sun worshiper and cannot resist an opportunity to live near water. I also currently teach at the Salisbury 6th form College and decided to dedicate my summer break to researching the arts in the grand setting of Venice. What k 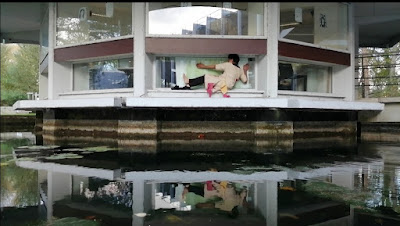